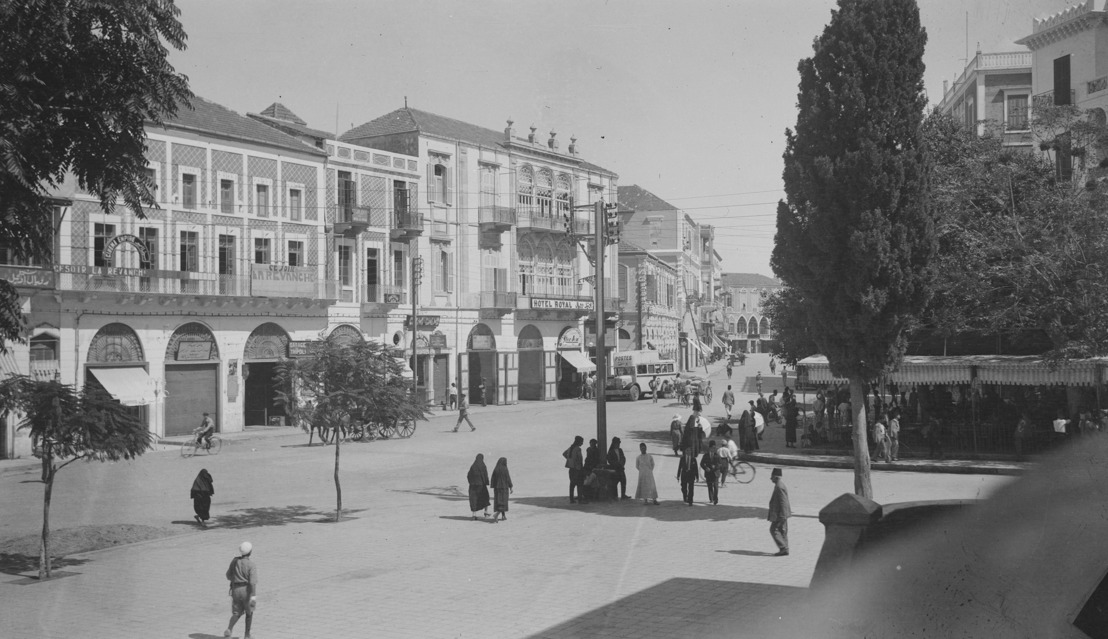 Our third issue of Stories brings together a line up of events and an interview with AIF's director Marc Mouarkech on Politics of Representation during the International Summer School in Latvia.

While Beirut hosts an eclectic set of events as part of Ashkal Alwan's Home Works 8, TripoliScope exhibition provides insight into the colorful history of cinema in Lebanon's Tripoli, as well as the social and cultural history of the city from the 1930s to the present with the support of the Arab Image Foundation.

In November, a reminder of the Endangered Archives Programme at the British Library with the deadline in less than a month for its grant applications for the next round of funding, and Dar El-Nimer opens its new show and exhibits large proskynetaria (souvenir maps); a series of Melkite and Greek icons; miniature souvenir icons, in addition to a series of historical photographs from the Holy Land.

Beirut //  The 8th edition of Home Works: A Forum on Cultural Practices opens today with a line up of group exhibitions, artist projects and new commissions, talks, performances, screenings, and publication launches.

Initiated in 2002 and taking place every 2 years for a period of 14 days, across different venues in Beirut, Home Works: A Forum on Cultural Practices aims to present to a local and international audience a full iteration of performances, exhibitions, lectures, panels, screenings and publications put together and prompted by the necessity to gather and discuss a common set of urgent, timely questions. More details on this year's program.

HW8 Parallel Events
Join us for a guided tour of the Arab Image Foundation and learn about the foundation's history and practices. Reservations are recommended on communications@arabimagefoundation.org or +961 1 569 373.

Tripoli // Curated by Nathalie Rosa Bucher, TripoliScope provides insight into the colorful history of cinema in Tripoli, as well as the social and cultural history of the city from the 1930s to the present. It is centered around the archive of the Société Commerciale Cinématographique, a company set up by Tripolitan businessmen in the 1950s, which successfully managed a group of cinemas in Tripoli and Mina.

Beirut // In the final stages of the Ottoman period, the Holy Land attracted many Greek and Russian iconographers, with local artists following in their footsteps and signing their works with their first names along with Al-Qudsi (the Jerusalemite) as an alias – a common practice of that time.

With its new exhibition On Earth as it is in Heaven, Dar El-Nimer will showcase productions of the Jerusalem School of Icons, the art movement which was established in the holy city highlighting the school's influence spreading to Syria and Lebanon, reaching different corners of the Orthodox world and even Coptic churches of Egypt. Read more.

On Earth as it is in Heaven exhibition is researched by Mahmoud Zibawi and curated from the El-Nimer Collection. Opening reception on 06.11.2019 at 6 p.m.

Grants Deadline
The Endangered Archives Programme at the British Library
11.11.2019

United Kingdom // The Endangered Archives Programme seeks to preserve cultural heritage and make it available to as wide an audience as possible. The EAP funds digitization projects to record the content of archives, which can include rare printed sources, manuscripts, visual materials, or audio recordings. EAP's aim is to enhance local capabilities to manage and preserve archival collections into the future, and therefore all applications must involve at least one archival partner in the country where the material is based.

The current deadline for preliminary applications is 11 November 2019. Application forms and guidelines can be found at eap.bl.uk.

The Endangered Archives Programme is supported by the Arcadia Fund and administered by the British Library. For enquiries contact: endangeredarchives@bl.uk.

In case you missed this
Interview

Latvia // During our talk at the International Summer School of Photography this summer on Politics of Representation, we showed an image of an Iraqi volleyball team that AI had interpreted as a military photograph. FK Magazine's Ieva Raudsepa interviews our director Marc Mouarkech on Lebanon's civil war, Politics of Representation, the Arab Image Foundation and upcoming programs.

IR. During your ISSP talk you showed an image of an Iraqi volleyball team that AI had interpreted as a military photograph. This is a good example of how biased algorithms are. As you spoke about the foundation holding different truths about how things are and have been, in what ways do you think we can fight against really stereotyped readings of imagery?

MM. I think it starts with very small things. We can instigate change. The exhibition we did in Arles is supposed to plant seeds in people’s minds. We wanted to confront the public with a certain reality on the way we look at images, how we see things based on what is being given to us and how our heads are programmed. In the end, we see daily a lot of images, we’re bombarded with visuals, and we just can’t digest it anymore.

At the foundation, we ask ourselves the tough questions. We started reviewing the ways we should tag, what should we take in consideration, how the communities are being represented, what are the words that we can use today, what are the words that we shouldn’t use, how open should we be or how conservative, should we have a political position or not, should we have a specific way of presenting things or not, should we keep things subjective or objective? Read the full interview.